Welcome to the July installment of Mushrooms of the Month. If you are interested in contributing to the mushrooms of the month please contact the web master using the contact form. 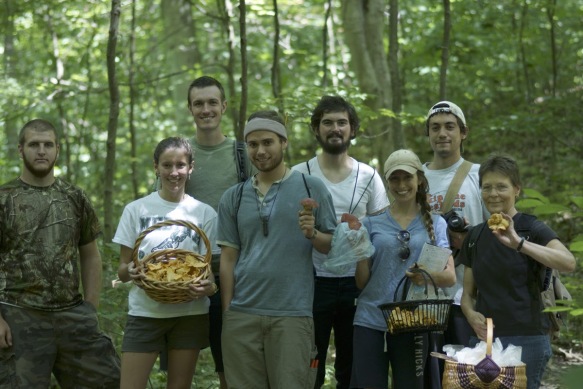 On a gorgeous Sunday morning, nine of us gathered at Strouds Run State Park to find some tasty edibles and new species alike. For most of us, this was another educational walk learning some new species exclusively from the area that I was not previously aware of myself and finding some delicious edibles such smooth chanterelles, tawny milkcaps, and beefsteaks! Everyone’s ambition and eagerness to find new species made it a pleasant day along with the incredible weather. Martha Bishop gave some insight to native wildflowers along with interesting facts about the local fungi since she is from the area along with being a Plant Biology Teacher at Ohio University. Here is glimpse of a few things we saw that morning and our species list for those few hours in the woods.

This past Saturday, I lead my first solo foray for OMS. Ten of us gathered to find fungi within the Hocking Hills region. I scouted out the areas the previous night at my typical spots to make sure we were not wasting time in the woods for Saturday’s foray. This did not end up being the case though, as I did find a diversity of species up in the Cedar Falls and Old Man’s Cave regions during my two hour trek. So this made the next day for us a lot easier for us and gave me more time to get to know everyone. Half of the group enjoyed taking photos along the way and the others enjoyed just being in forest and taking it all in as it was a beautiful day to be out!

Most of the photos in the overview were taken the previous evening in the same areas we visited Saturday, while the others were taken the next day along the way on the Cedar Falls and Old Man’s Cave trails. The last nine photos of this foray series were taken by members Hugh Urban, Candace Black and new mycophiles Kimberly & BrianTerrill. All of which did an amazing job capturing some excellent finds! Special thanks to Hugh Urban for helping with taxonomy, info and the species list.